Jaeheon Shim
Hi! I'm Jaeheon Shim, a computer programmer and technology enthusiast. Here on Learn The Technology, I write about technology and the effect it is having on our modern world. I write about a broad range of topics, ranging from 3D Printing to Cybersecurity.
Uncategorized

NET NEUTRALITY HAS BEEN REPEALED

We all enjoy having fast, unrestricted access to the websites we visit daily. But without Net Neutrality, this may not be possible. The dystopian future where the government controls all of the internet is imminent.
#SaveNetNeutrality = #ItsTooLate

What is Net Neutrality?

Net Neutrality is the regulation that all ISPs treat all content on the internet equally and not prefer a specific content provider. This basically means that the user can load any website they want regardless of where the content is hosted. It was implemented in 2015 under Obama’s administration but was repealed under Donald Trump’s presidency.

Without Net Neutrality, ISPs can treat different content on the internet differently based on their own preferences, and require an extra fee to access the ones that are not preferred. Also, without Net Neutrality, there will be nothing to stop ISPs from giving big corporations and wealthy households more priority. Check this diagram for more details:

More on the picture above:

Currently, you can think of the internet as a highway. It doesn’t cost extra money to ride in the fast lane, and anyone is able to take it if they have the capability to. Now, without Net Neutrality regulations and rules restricting paid prioritizations, poorer households will be left on the slow lane, and big internet companies will speed ahead on the fast lane.

How will our lives change?

As you can see, Net Neutrality had become an important part of our digital lives today. But how will your lives change now that it is gone?
NYTimes states that “Many consumer advocates have argued that if the rules get scrapped, broadband providers will begin selling the internet in bundles”. This means that you will be paying for access to different services, not the internet as a whole. Want to watch YouTube on your monthly plan? You might soon have to pay a ‘Social Media Fee’. In some countries, this is actually already happening. A Portuguese mobile carrier showed subscription plan names such as Social and Video. This would be contrary to the idea of the internet, which was supposed to be a place where people could gain knowledge at no cost. We would start having to purchase internet packages based on our needs. “An internet without Net Neutrality would put a halt to their [activists, journalists, teachers] critical projects and professional networks.
Once the effects of the repealment of Net Neutrality take place, you can expect inequality to soar. ISPs can now slow your internet speed, charge fees for certain websites, and delay access to many virtual content forms that we access for free today.

So what can we do?

The FCC is probably going to remove these rules. But before it becomes official, you can make yourself heard! If you feel strongly about Net Neutrality, you can email the FCC commissioners and rant against them about how we should keep Net Neutrality.
Ajit.Pai@fcc.gov Ajit Pai’s email address
Ajit Pai’s Net Neutrality video:

PSA from Chairman of the FCC Ajit Pai 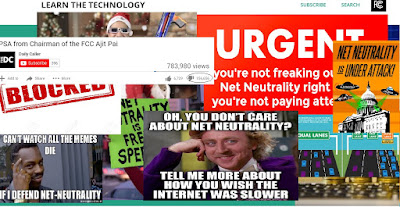