Jaeheon Shim
Hi! I'm Jaeheon Shim, a computer programmer and technology enthusiast. Here on Learn The Technology, I write about technology and the effect it is having on our modern world. I write about a broad range of topics, ranging from 3D Printing to Cybersecurity.
Uncategorized 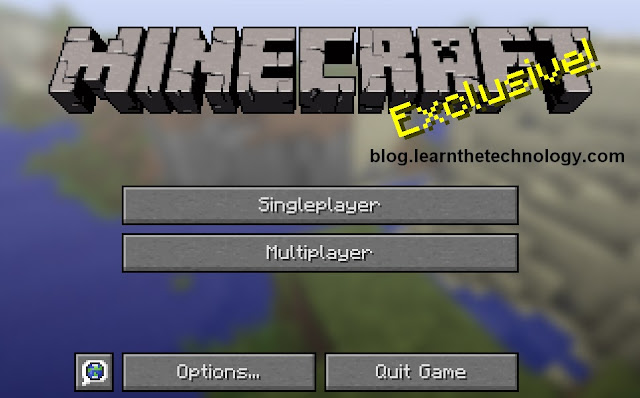 Games are fun, but friends are funner! 🙂

Minecraft is/was a popular game, and millions of players play it worldwide. Markus Persson, also known as “Notch”, released this game in November 2011. Soon after its release, the game became a big hit. In 2014, Microsoft bought Minecraft for 2.5 Billion dollars.
If you don’t already know the game play basics of Minecraft, they are very simple. In survival mode, the player is dropped into a world with nothing in their inventory. They (The player) must move around the world to gather natural resources such as wood and stone in order to create shelter before night falls, when monsters will roam the biomes of Minecraft. Meanwhile, in Creative mode, the player has an unlimited quantity of all the blocks and items in Minecraft. Most creative players choose to create colossal figures, or highly complex Redstone contraptions. Redstone is kind of like electricity in Minecraft.
But sometimes you don’t want to be the only person in your world. This is where Servers come in. In multiplayer mode, thousands of players can gather to play Minecraft in the same world. All that is required is one person to host a server for everyone. Servers are just what they sound like: A computer that hosts a single Minecraft world. The more players you have, the bigger servers you will need. But for just playing with a few friends, a spare PC can do the job. In this article, I will teach you how to set up your computer to run a Minecraft server.

Goal:
Create a working Minecraft server and port forward it.
Materials/Tools needed:
1 spare PC
Minecraft server files (Download here (Direct Download))
Determination to create a Minecraft Server
Steps:
So… Let’s get started!
First, if you haven’t already, you want to download the Minecraft Server .jar file from the link above. This is the Java run time application that will be responsible for running your server. You are responsible for hosting it (Connecting it to the internet) , but if you are successful, maybe you can hire someone to do it for you.
Once you have downloaded the .jar file, which is usually named server.jar or something along the lines of that, put it in a folder that is easy to find, such as one on your desktop. There should be no other files in the folder. You should create a folder on your desktop, and name it an appropriate name, such as server. This will make it much easier to organize your files and find them easily.
After you put your file in a separate folder, click on the server.jar file. Note: This will require you have Java installed.

After you click on the file, three more files will appear in the folder that you put the .jar file in. (This is why I told you to make a separate folder; so your files are not mixed up.) Before you can do anything, you have to agree to the end user license agreement. To do so, open the eula.txt file in the text editor of your choice. Notepad will do fine. Once you open the file, replace the line eula=false to eula=true.

This signifies that you have agreed to the EULA agreement on Minecraft, and you agree to continue. To read the eula agreement, go to: account.mojang.com/documents/minecraft_eula. Now, click on the server.jar file again, just like we did previously. Now, a few more files will appear, and a window named Minecraft server will appear. 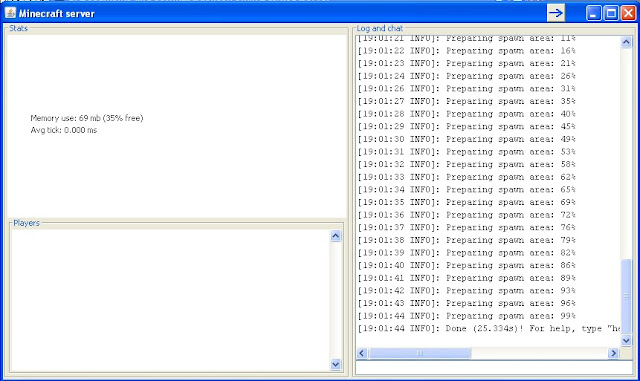 This is your Minecraft server admin console. I won’t talk too much about this, because it isn’t an important part of this tutorial. Basically, it’s a console where you can monitor your players, and control your Minecraft world. We don’t need this open right now, so just type stop in the command line. (The input box in the bottom right corner.) Don’t ever close it by pressing the X, because this will make your server crash. I’ll talk about what all these files do soon.

Now we need to edit the properties file. This file just has all of the necessary settings needed to run your server, including world rules, and ip settings. To edit this, just click on the file. You will get a window saying that the file format is not is not recognized. When given the option, choose Select the program from a list. Then you should get a window with a list of programs similar to this one: 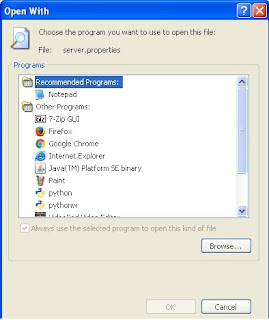 From the list, choose Notepad. Now you will be greeted with a list of server properties. Let me explain what some of these properties do:
allow-nether  Choose whether to allow the nether biome in your server (true/false)
allow-flight    Allow your players to fly in the game (true/false)
announce-player-achievements  Announce when a player has completed an achievement (true/false)
server-port     Leave it at 25565
level-seed       World generation seed (If you don’t know, leave it blank)
server-ip         Leave blank unless you know what you are doing!
pvp                 Allow player vs. player combat (true/false)
max-players   Maximum number of allowed players (integer)
motd              What someone will see as the description of your server. Make it anything you want!!! (That does not contain the # symbol).
If you have any other questions about these properties, feel free to leave a comment. Otherwise, change the file to meet your needs, and click save.

Before we move on, here’s a description of all the files you find in the server folder. Also, don’t delete these files because they all are important. 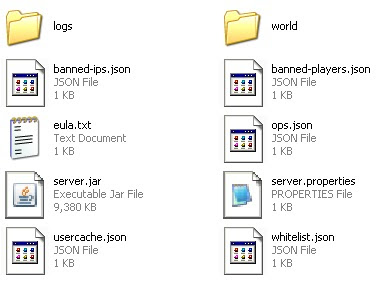 We are now about to begin port forwarding our server. This is a tricky part, but absolutely necessary if you want other people to be able to join. The settings vary for every router, which makes this part a little confusing. Prepare to follow instructions.
I will be port forwarding my server on my Netgear router.
IMPORTANT NOTICE: PORT FORWARDING YOUR IP CAN MAKE YOUR COMPUTER VULNERABLE TO ATTACKS. BE SURE TO SET A STRONG PASSWORD FOR YOUR PC, AND MAKE SURE NO SENSITIVE FILES ARE CONTAINED ON THE HARD DRIVE. ALSO MAKE SURE YOUR WIFI PASSWORD IS STRONG.
Port Forwarding basically opens your computer up so that other people can access it outside of your local network. This is necessary if you want people outside of your local network to be able to play on your server.
Step 1: Find your default gateway address. This is the address we use to access router settings, and it usually starts with 192.168.xx.xx, or 10.0.0.xx. To find this, you need to open the cmd console. This is very simple, and all you need to do is press the windows key and r at the same time, then type in cmd. 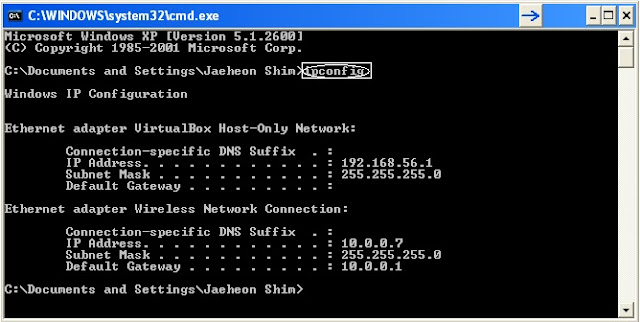 Once you are in the console, type in ipconfig, and press enter/return. Then look at the number beside Default Gateway. Mine is 10.0.0.1, but yours might be a different number such as 192.168.0.1. Also, note the number after IP Address. It should be in the same format your gateway address was. Mine is 10.0.0.7.
Now type in that number in the search bar of your browser.

When you press enter, you will in most cases see a login screen asking for an username and password.
The default credentials for routers are:
Username: admin
Password: password
If this does not work, you will have to search up your router’s credentials.
This is where things get a bit different for each of us. The goal is basically to find an option named Port Forward/Port Triggering. You might have to do some searching to find it. For me, I clicked on the Advanced tab, and then advanced setup in the menu.
Now that you have found the option, fill in the properties.
For service name put: Minecraft
For protocol put: TCP/UDP
For port range put: 25565
For internal IP put: The IP address we established earlier. Mine was 10.0.0.7.
Then click apply.
So there you go! Now you have your own Minecraft Server! Be sure to invite people and play on it! If you have any questions, be sure to ask them below in the comments!
Enjoy!
Jaeheon Shim
No sources used